Pasteles - a Taste of Puerto Rico in Austin! 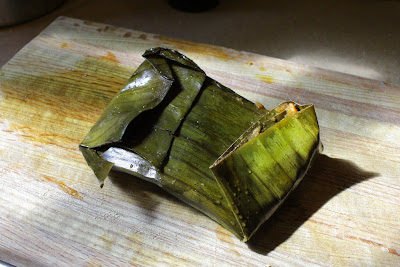 After (another) unplanned hiatus - this time three weeks! - I decided to come back big. I tackled pasteles, a kind of Puerto Rican tamale, which my friend Rachel requested I make a couple of months ago. I was slow getting to it, but I blame my sister-in-law for inducing me to read the Fire and Ice Chronicles (Game of Thrones series) which occupied my time completely for the first 6 weeks I was in Austin. There were days I didn't even leave the house because I couldn't stand to put the books down for more than 20 minutes. People asked me what I thought of Austin so far and I could tell them what I thought of the Starks and Westeros. Then there's that pesky "job search" thing. I don't know how many hours I've spent searching and applying for jobs, but the result of the effort is still lacking. Austin is a great city for live music, the software industry and the University of Texas - outside of that it's a bit of a struggle! So what I'm trying to say is, I haven't cared much about cooking for the past few weeks - but now I'm back.

And I think I need to start tackling easier (read: less time-intensive) recipes. Not that pasteles aren't worth the effort - they are super delicious - I no longer feel justified in spending an entire day making one dish. I once again learned to trust Seth in some things, such as when he told me it can take a day (or more) to make tamales, so did I know what I was getting myself into? Haha, I do now. Am I glad I made the effort? Hell's yeah! Pasteles are delicious and the masa, made of a combination of yucca, taro, green banana, plantain, potato AND pumpkin, is moist and slightly sweet, both a refreshing change if you've only tasted corn masa and a nice foil to the stewed pork it encloses. Seth and I ate our first few straight from the pot, then discovered that allowing the pasteles to rest for several hours (allowing the meat and masa to meld their flavors) makes them amazing. It's not difficult to understand why these are such a special treat. 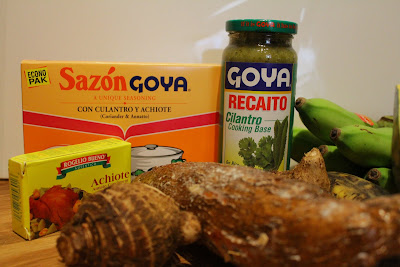 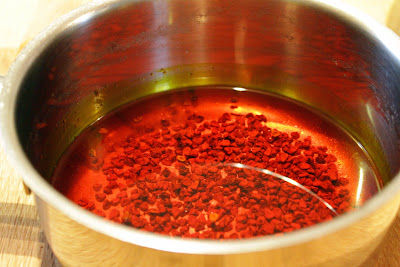 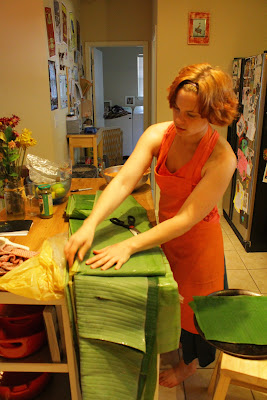 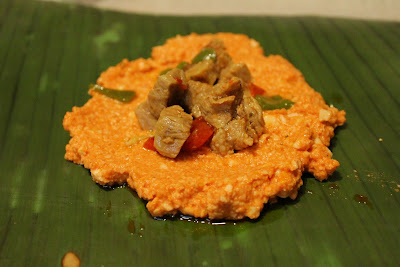 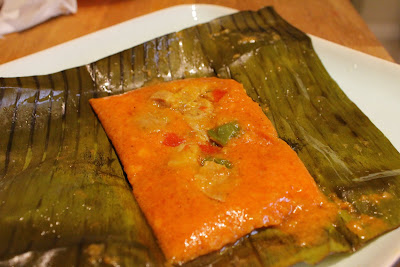 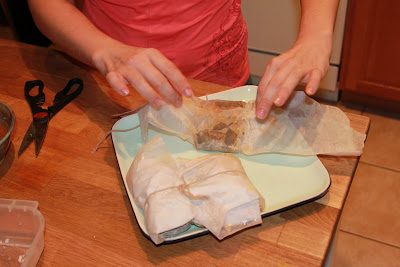 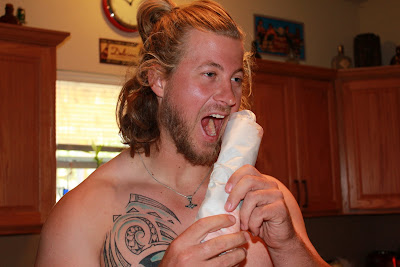 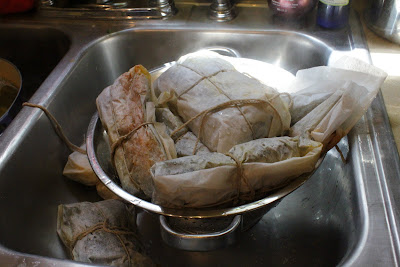 I made a few adjustments to the recipe and, despite the fantastic end result, would make more if I ever tackle this again. First, I ended up with almost half the masa remaining after making my pasteles so I would reduce the masa ingredient by at least 1/3, if not a total half (I've done this for you already!) Also, the original recipe called 1/2 cup annato oil and 6 tablespoons achiote, which it described as "annato oil". What? Goya sells achiote paste which I mixed with 1/2 cup water and used in the masa. It tasted good so I think I made the right choice. I also recommend refrigerating for a couple of hours so it doesn't goosh all over the place when folding the pasteles.  Finally, I have mixed feelings about the banana leaves: they impart a distinct flavor but are an ass to work with and I had to wrap everything with parchment paper because the leaves kept splitting, even after softening them up in the oven. Meh, who knows what the future will bring? 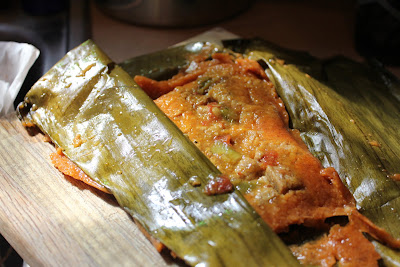